skip to main | skip to sidebar

Here's the result of months of stringing beads, setting rhinestones and attaching the pearls! I still like the tassels as you can see. Take a look at the new collection on Etsy mdmButiik. Click the listings, look at the photos and share if you like :) 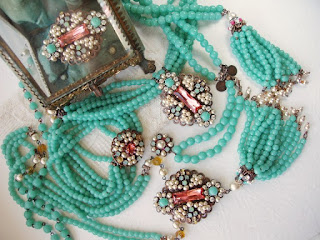 Here's a group photo of some of the rhinestone jewelry.
*** 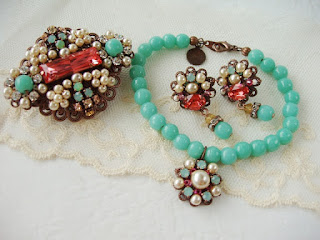 Rhinestone brooch is available on my Etsy shop. As well are the charm bracelet and stud earrings.
*** 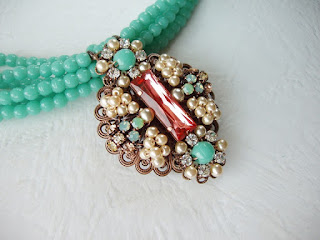 This rhinestone necklace is fit for a princess!
*** 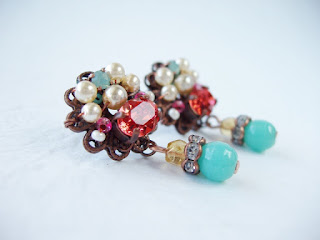 These rhinestone earrings are rather small, measuring 3cm long.
*** 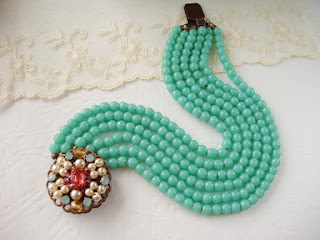 Lot of bead stringing here! These old French Prosser beads have such a nice rustic look!
This rhinestone bracelet is available on Etsy.
*** 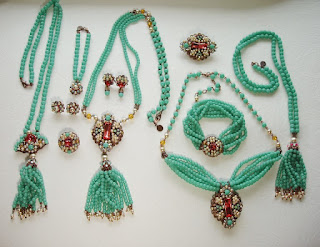 Fun tassel necklace on the right is perfect for everyday wear! The necklace on the left was the last one I finished. There are also some other jewelry that can be combined with the ones on the photo. See more at mdmButiik Etsy.
***

The Beginning of the Story

Couple of months ago I met a person who ask me if I was "the one that's been around a really long time". In context of handmade jewelry. I remember I choked and didn't know what to answer. And then I got a mail from Jordan from Invaluable.com to write a story about a piece of jewelry that has significant value to me. And yes, that triggered a flashback and I'm taking you all with me on this.

Through out the time there's been many jewelry pieces that had a certain effect on me - either teaching me about composition, colors or techniques and also inspiring me. But the most influential piece of jewelry was a beaded necklace from Czech. My memory of it has faded a bit but I still remember that it had red and dark blue (almost black) pressed glass hearts and 4mm round red beads. The red was in the most beautiful opaque color. I'm looking for this color every time I shop for beads, and the closest color is Czech color 93200. But when I compare the two - the beads from the Czech necklace and new ones - there's no match for the old beads! I wish I could travel back in time and take a photo of the necklace! Because the end of that necklace was really a beginning.

When I was a kid I made rings out of wires from old TVs and such that had colorful plastic coatings. But I didn't dare even to dream about glass beads... So once numerous times I was "rearranging" my mothers jewelry box and there were two similar necklaces, my mother told me I could take the broken one and make something out of it. Anything I want. And that was the moment. That was the beginning of my jewelry story.
*** 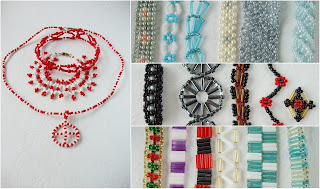 This is my very first necklace (around 1996) on the left. Before that I made only bracelets, single rows and so-called "slave bracelets". Round red beads are from that Czech necklace I wrote about. You could probably imagine that after the first Czech necklace I wanted more beads. So time after time I could possess more necklaces from my mothers jewelry box. Rather primitive jewelry on the left is all made of Czech beads from that origin. On the right there are some samples of different beading techniques I so eagerly invented because there was nowhere to learn. Only technique here that I learned from web is on the top right - African Helix - that is weaved so thread passes every bead only once. That was probably in 1997-98 when the instructions start to emerge on the web. Beads on the left were from sewing supply stores.
*** 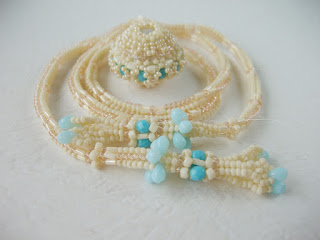 This is an unfinished lariat in herringbone/ndebele technique that became my favorite. I remember there were no bead-shops in Estonia that time so I made my purchases from Czech, UK and US. That was so exiting times! I was able to use Czech glass beads in any color and shape! There was supposed to be two of those big beaded beads on both ends of the lariat but the second bead is still unfinished and that's why I can show you this as something to represent my next step in my jewelry story.
*** 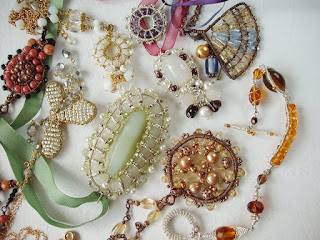 In the beginning of the 2000's I saw the possibilities of wire. By that time there were also some books available to learn from. I started with simple wire bending and looping and ended up with wire wrapping technique. As you can see I tried different color wires: brass, gold plated, silver plated, sterling silver and antique copper. I also used black colored wire and sometimes used red and green :) I also tried different beads - semiprecious stones, natural pearls, handmade beads, Swarovski crystal and metal beads along with Czech glass beads. I opened mdmButiik shop at DaWanda in 2007 and tried my hand in selling jewelry. That was also the year I started this blog.
*** 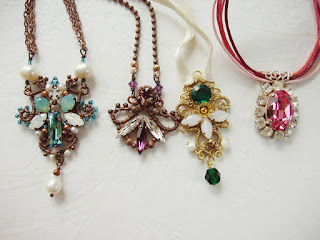 By the 2009 I had already fallen for the rhinestones. I used them with wire wrapping, embroidery and also attempted soldering. That was the time I discovered the vintage glass stones! And that some of them were out of production. I realized how much I enjoy the hunt and how inspiring they are to me... Old glass components were thrilling and from there I started to take the aim for vintage look. 2009 was the establishing year of company mdmButiik.
*** 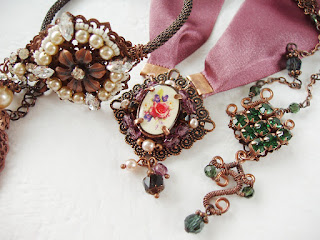 Here are some examples of jewelry where I started to combine the rhinestones with stamped filigree plates. I had already started to contact the manufacturers and wholesalers for components I couldn't get from stores or I was using in such a big amount. As you can see antique copper colored components have taken over. It was a bit scary to choose this as my metal, because I heard people say that this doesn't go well with engagement/wedding rings (and it might be true) and I knew the selection of the components was truly small compared to silver or gold plated. So my choice was nothing else but purely holding on to what inspires me. In 2010 I opened mdmButiik shop at Etsy.
*** 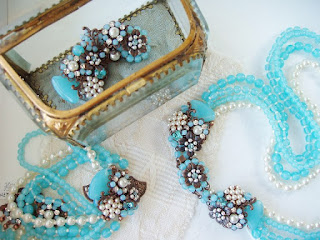 And these are the examples of jewelry I make at present time. Czech glass beads are something that I can't design without. Although I don't turn up my nose at beads from other origin. I love pearls! And yes, I'm still into rhinestones. I've stayed true to antique copper even though this hasn't been my plan. I don't like the idea of setting myself boundaries no matter if it's about the materials I use or the style I try to achieve. I want to follow my inspiration.

Here is a new line of tassel necklaces that I just recently finished. Beaded with old beads from France and Czechoslovakia, strung on fine chain. In medium length 41-42cm, with extra 7cm long tassel that drapes perfectly!

Took a lot of details to put the crystals and beads on the tassel cap, but it was really worth it. I need sparkle :) These are truly fun to wear! I'm going to wait a bit to see if what color I want mine to be. It's decided, I'll make one for myself. 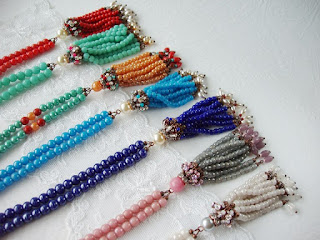 These necklaces are truly fun to wear! These drape perfectly and
have medium length of 41-42cm with extra 7cm tassel
*** 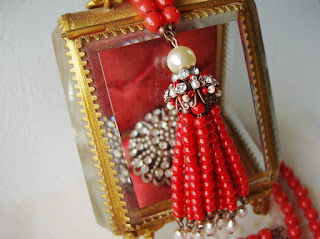 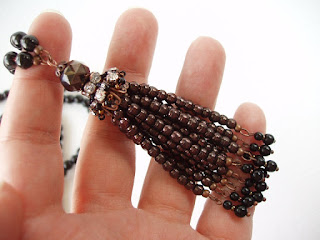 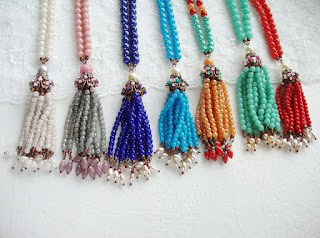 Some progress shown here... This is an interesting color combination, I must add. More to come! 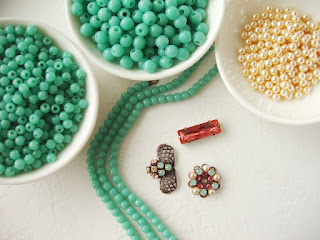 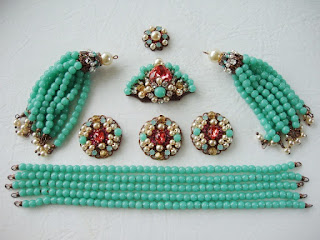 Some half-made details that will become a piece of the most romantic jewelry :)
*** 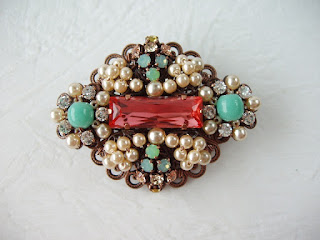 Sparkly rhinestone brooch. In the center I put a Swarovski "baguette" crystal
in Padparadscha color.
*** 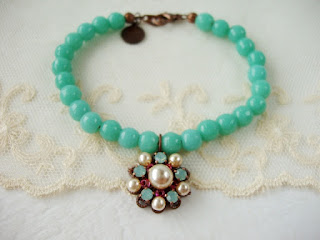 Cute bracelet with a rhinestone charm!
***

It's time for new collection. My mind is waiting and my fingers are ready for it. Here is a selection of materials I'm planning to use.

The turquoise green beads I got from France. These are vintage, made in Prosser technique, and have glossy and bright color. The turquoise color will create a nice contrast with the Swarovski rhinestone color Padparadscha. Vintage topaz luster colored glass beads from Czechoslovakia will complement it. Caramel toned pearls will add lightness and provide possibilities for matching the ready-made jewelry with others. And I guess I can't do without Crystal colored Swarovski rhinestones... 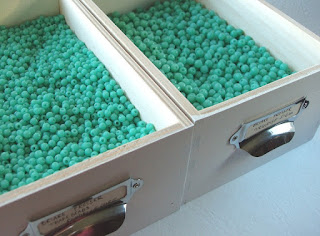 Prosser beads from France have pretty turquoise green color.
I have them loose in little drawers in different sizes 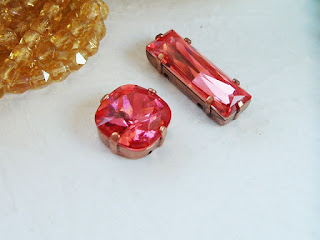 Swarovski Padparadscha is such a fierce color! 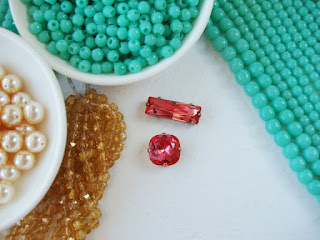 In this picture I tried to present most of the materials,
including caramel tone Czech glass pearls and
vintage "English cut" topaz luster beads

I was able to make a hair comb using these vintage glass leaves. These leaves have such delicate and fine pattern that it seems almost as if these were real. Frozen.

I combined these leaves with Czech seed beads and antique French Prosser beads in oval and round shapes. 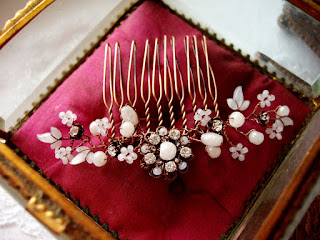 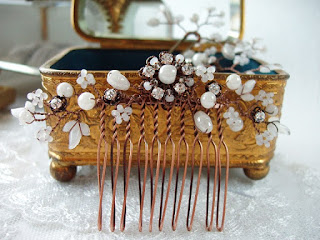 This would look fabulous in vintage style winter wedding! 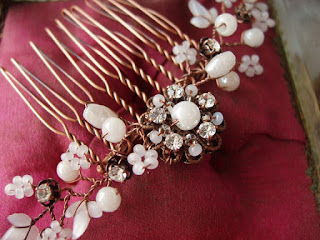 Small Swarovski crystals are gathered in the center of the comb
with few rhinestones sparkling in the branches.

Like what you see? Join my little club so you don't miss a thing! 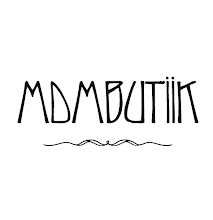